Now that my four weeks of work for IBM are over, it’s time to relax and vacation for a week. Dave landed Saturday evening and we spent the evening at a hotel at the Joburg airport.  He was able to power through and have dinner with me before passing out at 9 pm.  Which is admirable given he had been traveling 24 hours (15 of which were on one continuous flight) and is battling the 6-hour time difference.

On Sunday we took a 45-minute flight to Hoedspruit, one of two commercial airports near Kruger National Park.  This was unlike any commercial airport I’ve ever been to — there was an excessively huge landing strip (it serves the military) and then we arrived at a small brown building.  There were no gates and there was no baggage claim.  We took the stairs off the plane, walked on the runway and into the barbed wire gate to find as many drivers with sign boards as there were passengers.  We passed through the small building which had bathrooms and a small counter and out the other side to wait on our luggage which was driven over in a pick-up truck.  3 flights a day land here and 3 take off, all between 11 and 2 pm, so I’m guessing it’s closed most of the time?? 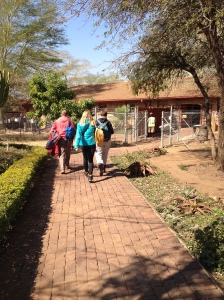 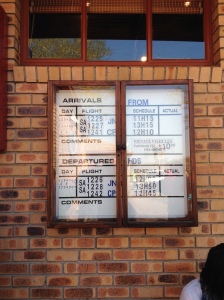 We were off to Thornybush Game Reserve which is a private game reserve just near Kruger National Park.  It has 9 different lodges in the reserve and we are staying at the flagship location, Thornybush Game Lodge.  It’s one of the bigger lodges with 18 suites (well, separate little houses for each guest), but as of today, there are only 5 groups here and we’re one of them. The main area is all open air where we have all our meals, have access to WIFI, and gather for the drives.  It overlooks a dry riverbed (because it’s Winter and dry season) and we watched a giraffe eat lunch while we ate lunch today.  Just like my previous safari in Madikwe at at Tau, the lodge, rooms and food are all top notch.  The days are really nice — 60 and sunny with us in short-sleeves at lunch, but the beginning and ending of each drive has us in gloves, fleece, winter shell, blankets and hot water bottles (a nice touch!) 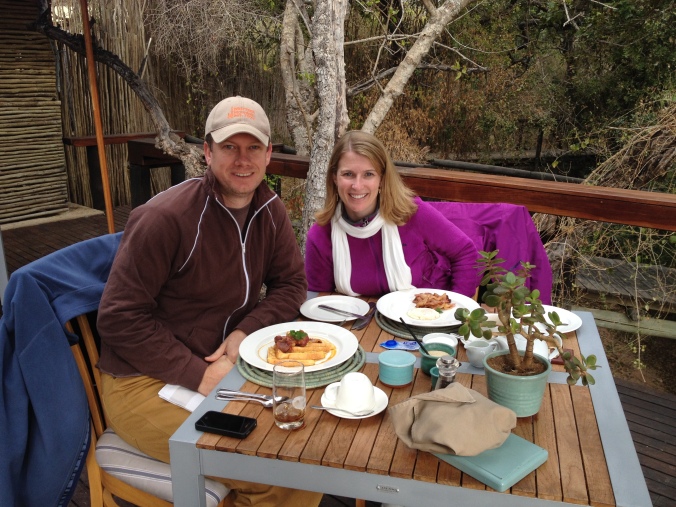 We’ve done two game drives thus far and will continue doing one each evening from 4 – 7 pm and each morning from 6 – 9 am.  Our ranger is Jamie and we have a tracker on this safari, named John.  The differences from Tau are pronounced, mainly in the landscape.  Tau was old farm land converted 20 years ago to a Reserve so there are wide open expanses.  Thornybush is mature with the thicket and trees quite dense so you can only see a few feet in either direction.  Despite all the hiding spots, our ranger and tracker have found us plenty to look at, including rounding out my “Big 5” by finding a leopard cub!  Dave has picked up 4 of the Big 5 by seeing two lions, a whole herd of elephants, a herd of buffalo and the cub.  We’ve also seen zebras, giraffes, jackal, baboons, monkeys, warthogs, impala, kudu, waterbuck, wildebeest and lots of smaller items.  We’re on the lookout for rhino and cheetah this afternoon … wish us luck! 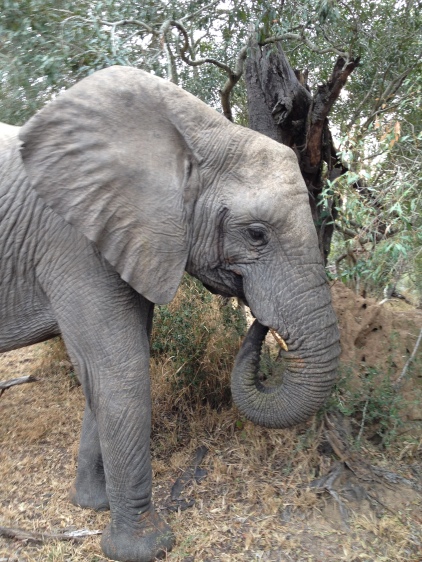 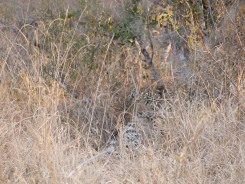 The leopard cub is hiding 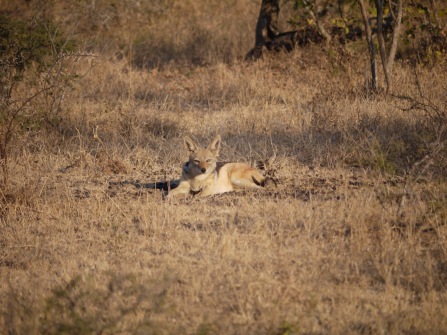 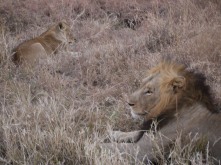 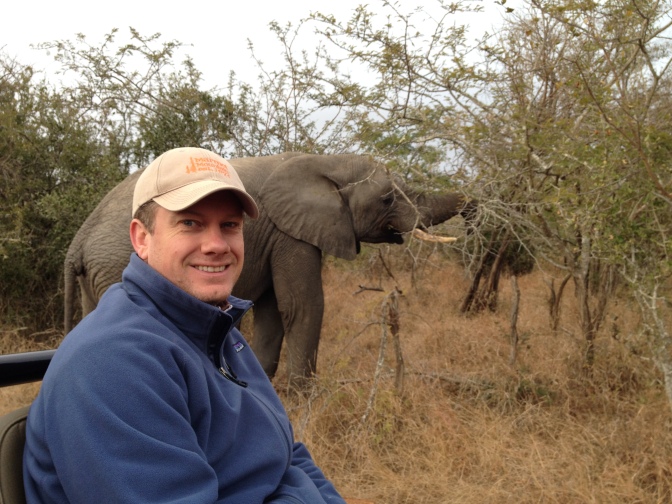 One thought on “Thornybush Game Reserve”